Child (of up to 5 years of age) — free
Ticket price at the pier (if available):

Open date tickets can be used for any cruise before navigation stops. Electronic tickets must be printed out or shown at the checkpoint from a mobile or tablet screen.

Cruise description
Join us on a cruise along the most picturesque river line within the city of Moscow! The cruise around Serebryany bor island is a real pearl of the Moscow waterways.

During the cruise, a comfortable boat will completely round the nature monument of Serebryany Bor, allowing our passengers to sit back and enjoy from above the spectacular views of the Trinity Church, built in 1703, as well as more modern sights on the northwest of the capital, such as Zhivopisny brige, the first cable-stayed bridge ever built in Moscow, and the views of Krasnopresnensky prospect. Among other sights flowing by the boat, you will find unique water control facilities erected in 1935-37 during the construction of the Moscow Canal: Karamyshevskaya dam and hydroelectric station, Khoroshevsky navigation canal and barrage gate No. 116.

After the boat sails into Serebryany bor bend from Shchukino, the overall impression is that you’re not in one of the districts of a huge noisy city, but that you have sailed far beyond its borders, and now are floating on a quiet river surrounded by soft-wood forests.

3 piers for boarding
Pick the pier that suits you most!

Amsterdam
type Moskvich
Amsterdam is a fine motor boat of the 544 project, the famous "river tram", the most well received and popular both with the city dwellers and its guests passenger boat designed for local transportation during the soviet era at various shipbuilding plants across the Union.

The length of the ship is 27 meters, its width reaching almost 5 meters - such dimensions and the small draft of its hull allow it to pull snugly into all the metropolitan piers. The boats have the required certification, allowing them to cruise safely up and down the city’s small rivers without sailing into the reservoirs.

Able to accommodate up to 60 passengers

Payment by card accepted on board

Child (of up to 5 years of age) — free
Ticket price at the pier (if available):

Payment with no commission charged
We accept Visa, MasterCard and Mir payments

Payment protection
The cardholder information is encoded when transmitted and is not stored any further, thus keeping the payments safe

Ask us a question

Thank you! We will conact you as soon as possible!

River passenger boats appeared in the villages of Strogino and Troitse-Lykovo in the early fifties of the twentieth century and were originally meant merely for transportation purposes. Back in the day, fresh-out-of-the-oven Moskvich boats, just built at the Moscow Shipyard, carried passengers of Strogino, Troitse-Lykovo and Tatarovo villages to Shchukino and Serebryany Bor, where the workers then took street cars and trolley buses to get to the city center and metro stations.

The ferries operated in a mode of real public transport straight from six to one in the morning, at intervals of 15 minutes, and navigation lasted as long as it could: from early spring to late autumn. After the termination of navigation pontoon semi-permanent bridges were erected.

Gradually, Moscow started absorbing the outskirts; new roads and bridges were constructed, and small villages and rural areas replaced with urban ones. Thus, the villages of Tatarovo, Strogino and Krylatskoe were completely destroyed. Ferrying the workers was no longer necessary. However the river transport, still fancied greatly by the residents, started to be used for recreation means, all the more so since the North-Western water area was always renowned for its particularly picturesque landscapes.

The Circumnvagition line is now served by Amsterdam boats, which started navigating in 2016, and of course favorite back-on-track "M" motor boats - that earlier had only hard wooden benches to offer to its passengers, with their number sometimes reaching 200, and that are now equipped with the state-of-the-art technologies and can comfortly accomodate 60-70 guests.

Landscapes unfolding before the passengers as the boat glides through the river line waters have also changed. Passengers can now admire a chic ellipse shaped Zhivopisny bridge, supported by the cables, whose large-scale construction immediately became the pearl of the route. The reconstruction of the Trinity Church in Troitse-Lykovo, an architectural monument of the 18th century, built in the Naryshkin Baroque style, is also finally completed.

On the site of the demolished village of Tatarovo there now is a promenade area for residents of Krylatskoe. Time flows, as well as the waters of the Moscow River, but the landscapes of the Northwest of the capital remain unfailingly beautiful, silent witnesses to the long history of this land. 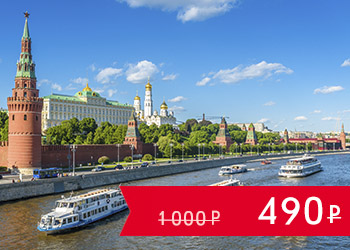 The central Moscow river walk is a two-hour route around the center of the capital from the Novospassky Bridge to the Vorobyievi Gori and back. The line is served by comfortable two-deck boats, throughout the cruise guests are welcome to enjoy a variety of snacks, hot and cold dishes, soft drinks and hard liquor.

You can hop on at any pier you like, thus having the opportunity to plan you own itinerary, and still experience the whole walk hopping off exactly where you hopped on.


From October 20, 2022, a restriction is introduced on the approach of boat to the pier Crimean Bridge.There will be no embarkation or disembarkation at this berth​. 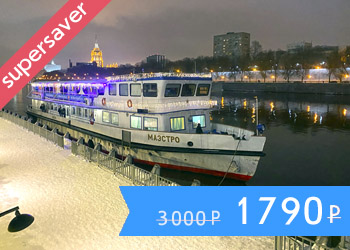 We’d like to invite you on a fabulous river cruise through the centre of Moscow aboard the comfortable two-deck Maestro boat. А delicious dinner, the musical programme in "Made in USSR" style and spectacular views of the capital sights: the Moscow City skyscrapers, Vorobyovy Hills, Gorky Park, Peter the Great Statue, the Cathedral of Christ the Saviour, the Moscow Kremlin, the Saint Basil's Cathedral. Enjoy a memorable time on the Moskva river taking advantages of the excellent onboard service, nice music, the wave beat and a friendly company. 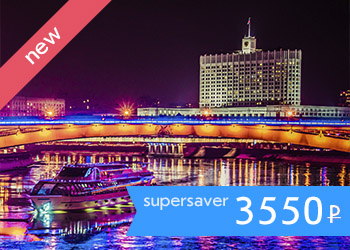 Take an unforgettable gastronomic cruise along the Moscow River on a luxurious superyacht of the Radisson Royal flotilla with a remarkable Erwin.River restaurant aboard. During an unusual water trip through the center of the capital, you will gain a refined and exquisite dining experience from an acclaimed seafood restaurant. Also on the menu - the fascinating views of the embankments to be enjoyed from the huge panoramic windows the yacht sports, and Moscow’s iconic sights from a totally new perspective!

About the company
Information for the clients